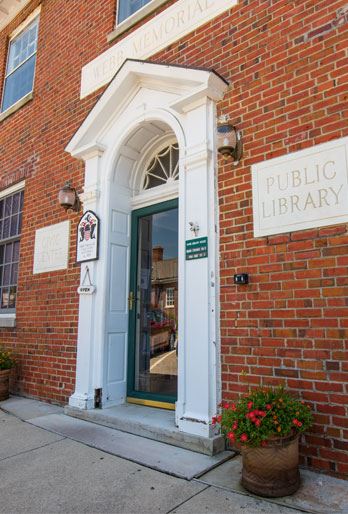 For the first few years, the building had doctors' offices downstairs and a training facility for the local garment factory upstairs. When the upstairs noise became too much for the downstairs occupants, the garment factory left. Mrs. Webb, a member of the Morehead Woman's Club, asked her husband if the club could move its 300 book library to one of the upstairs rooms. When he agreed, the library was moved.

A few years later in 1936, the Webbs' son, Earle W Webb, Jr., became ill and died. In honor of their son, Mr. and Mrs. Webb dedicated the building as the Earle W Webb Jr. Memorial Library and Civic Center and opened it to all the citizens of Morehead City for community use.

In 2003, the trust supporting the facility was no longer viable. At that time several interested citizens petitioned the town of Morehead City for help. The town council agreed to help with the day-to-day costs while a steering committee researched the level of interest in the community to maintain a library and gathering place for its citizens. The steering committee recommended that the town take over full support of the library and in 2006 the town and the Webb family entered into a 99-year lease that would allow the town to operate and maintain the library while the Webb Family Trust would keep the building.

Today the building is more familiarly called The Webb and provides services for locals and visitors from all over North Carolina and beyond. The book collection has grown to over 13,500 books and there are six public-use computers and one computer dedicated as a catalog. In August 2019, the library celebrated its 85th year of service to the public.